The morning after the McGregor Aldo fight I took an interesting call from a journalist from Australia.He was doing a piece for a major Australian broadsheet on the increasing influence Conor Mcgregor is having on male fashion in Ireland.I was able to confirm his suspicions that the influence is significant and he is without doubt the biggest source of inspiration on mens’clothes in Ireland.He has really brought the three piece suit within the radar of the younger generation in Ireland.There was a time when a young man would only wear a suit on his debs night but all that has changed as teenagers and twenty somethings are getting dressed up on a much more frequent basis.Young lads are donning check suits,braces,dicky bows and all sorts of accessories as they try to emulate the dapper look of the man from Crumlin.It would be going a step too far to say McGregor has invented a whole new look in fashion.In many ways he is simply latching onto a wider vintage/retro trend that is widespread in the world of fashion.However due to his appeal and position as a global icon he is magnifying a trend that would otherwise be much more subdued.

The retailers such as ourselves that specialzse in formal wear and tailoring have definitely benefited from the Mcgregor phenomenem.I confirmed this with my Australian interrogator and he was fascinated by the influence I allocated the MMA champion.Below is an excerpt from the interview which went on to appear in a major Australian broadsheet. 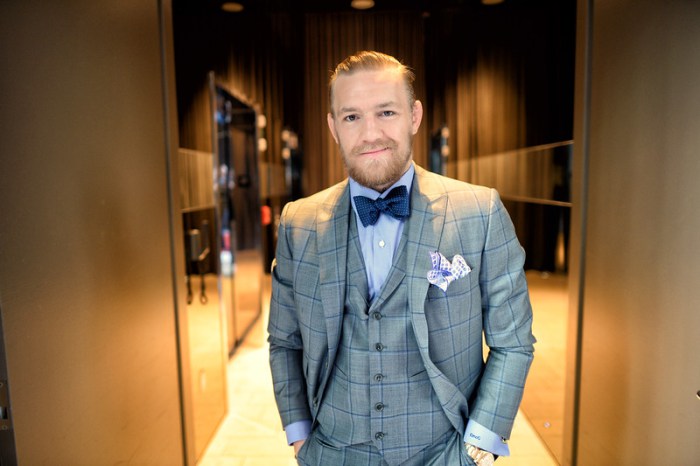 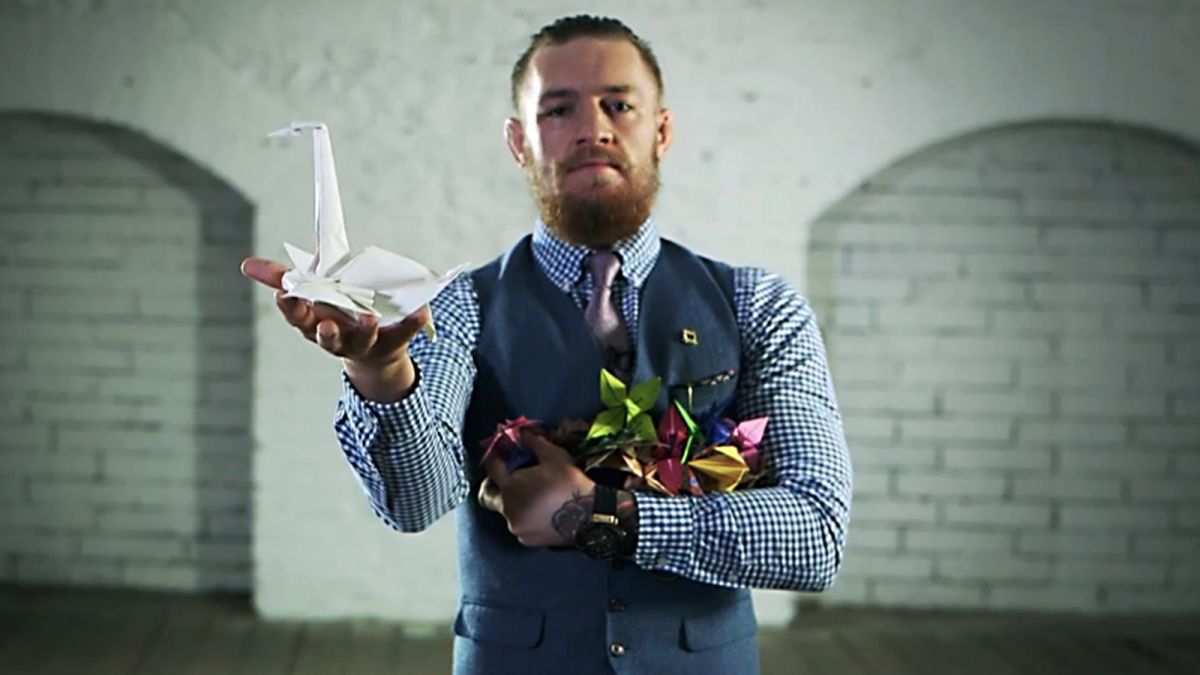 Conor McGregor has brought something to Male Fashion in Ireland 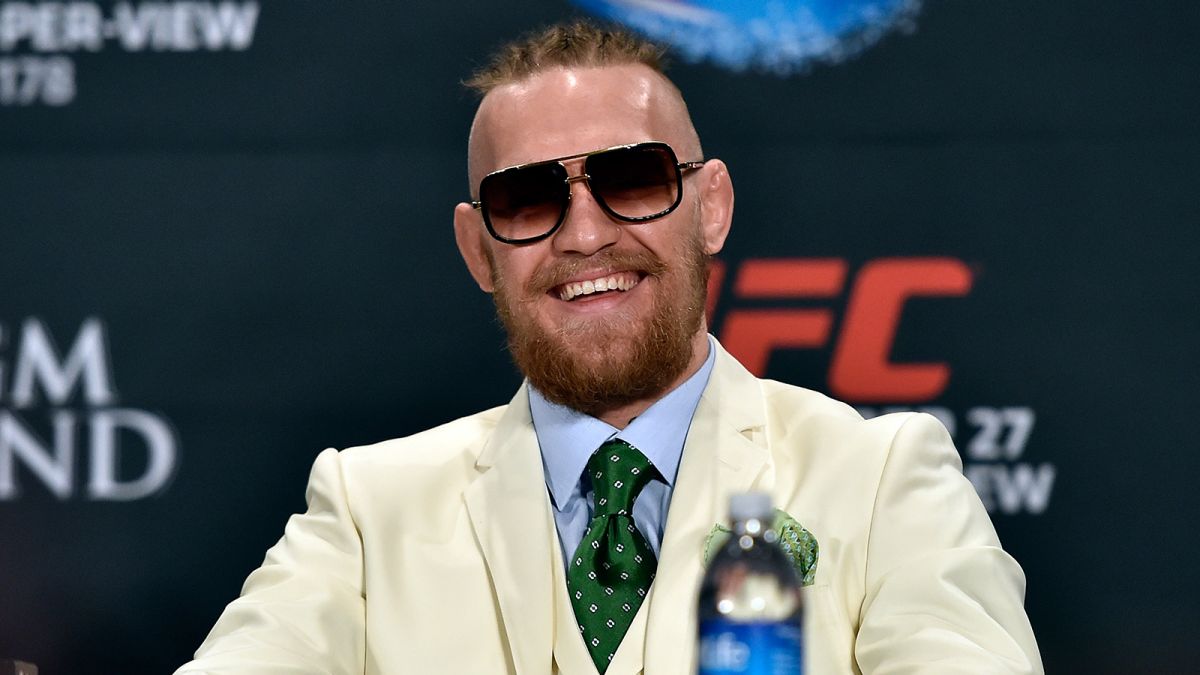 Not Many Irismen could look cool in a white suit

The cauliflower ear is a sign that Conor McGregor isn’t your typical dandy. But even if you missed it, his raffish look – clad as it is in a three-piece suit – tells you the 27-year-old Irishman has a mean streak.

If you didn’t know, McGregor is the world’s biggest name in mixed martial arts, his star is set only to rise further after claiming the Ultimate Fighting Championship (UFC) featherweight title bout last weekend in just 13 seconds.

However, away from the UFC’s body-tormenting training and savage fighting, McGregor appears completely at home ‘peacocking’ with the world’s best dandies on the European fashion circuit.

It’s not just the exquisite suits – often in bold checks and stripes that emphasise his pugilist chic – but an unbridled confidence that defines him. After interviewing McGregor for this month’s issue of British GQ, journalist Alastair Campbell, formerly Tony Blair’s director of communications and a seasoned political strategist, wrote: “I can’t recall ever being in the presence of a confidence quite like it.”

It is in this trait, not just the speed and power of his feet and fists, that much of his power lies. His supreme belief in himself fuels his many detractors, but has also inspired masses of young Irish men to emulate his unwavering and highly refined style.

I can’t recall ever being in the presence of a confidence quite like it.

The sort of style that can see him turning up to a trash-talking press conference dressed like he has come from lunch on the French Riviera.

Lord of the dicky bow

Louis Copeland, of upper-tier Irish menswear store Louis Copeland and Sons, has a long-standing relationship with McGregor. “He’s made a big influence on young people in Ireland. There’s a whole sway of young people 18 to 25 now starting to dress up and generally up their game,” he says.

“We have made a lot of suits for him, somewhere between 20 and 30. He has always been a natty dresser.”

Thanks to McGregor, bow ties (or dicky bows, as the Irish call them) and waistcoats are now standards items in Irish lads’ wardrobe, says Tom Murphy, who runs a menswear store in Cork.

In a phenomenon that must foster a grudging respect for McGregor even amongst Ireland’s pacifist parents, Murphy says he has even begun selling tweed to teenagers.

“There’s a lot of younger guys, some as young as 16, buying tweed suits because he’s popularised them, basically. I have a picture of him on my front window at the moment in a tweed suit,” Murphy says.

While McGregor can lay claim to being the most dapper bruiser going around the world’s various fighting formats, he isn’t the first fighter to adapt a sophisticated style outside the ring.

Another man who broke the mould and did away with the less refined attire favoured by many of his contemporaries was none other than Muhammad Ali.

During the 1960s, the irrepressible champion favoured houndstooth jackets to leather great coats, knitted polo shirts to lurid shirts. When he was in the UK, Ali liked to get his suits made on Savile Row.

“I’m a gentleman now, I have to look like one,” said Ali to Life magazine photographer Gordon Parks.

Then there was the eccentrically-dressed British boxer Chris Eubank, who in the late 1980s and early ’90s was a great wearer of tweed and – just to emphasise his rakishness – even carried a cane where ever he went.

But perhaps the one aspect of a fighter’s look that every man wants, besides the chiselled torso, is the shoulder-rolling boxer’s walk. Master that and you, too, can wear a waistcoat and dicky bow all you like. Chances are, few will judge.

Blog about lead up to Christmas that I never got time to finish!

This is a blog I started writing a few weeks ago in the lead up to Christmas but never got time to finish!It is New Year’s Eve now as I finish this off and I feel a bit silly posting something a few weeks old.Thankfully it has been a busy few weeks although I have...

Sean Og togs out for his wedding

Sean Og O hailpin popped in over the Christmas period to organize suits for his wedding and we were thrilled to deck the iconic legend and his brothers out in Gibson London black tuxedos.The lads were unbelievably nice and it was an absolute pleasure looking after them.The only issue was there was a fair amount...