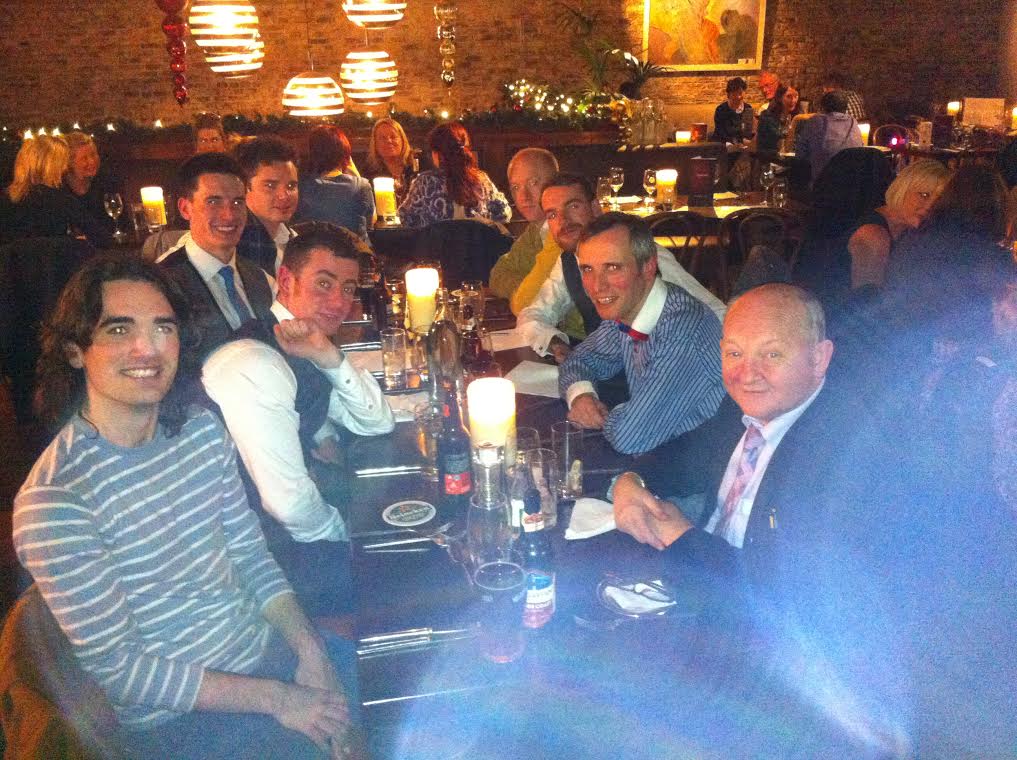 The Tom Murphy Boys Out on the Town

After much planning and discussing about prospective venues , the Tom Murphy staff night out took place last Saturday on a cold , wet , windy night in the city centre. The chosen location was the Cornstore and after the civilized ritual of the meal was dispensed with , the real party began.
As always , the oldest member of the team , Tom Crowley , had to bne first up to the bar to get his round in. He kind of forces you to take a drink off him and its not a good idea to say no to Tom.
At 5’1″, he might not be physically very intimidating but once he speaks he has the tendency to make you freeze on the spot with fear , so if he tells you that you are having a drink , you better not decline!
As always , Caoimh was the team leader when it came to motivating everybody to keep the fires of the party burning brightly.When he is out on the town he is like a child , giddy with excitement as he plans each and every move for the entourage.
The two part timers Kevin and David had mixed fortunes on the night. Kev was beaming from ear to ear as he got his first proper meal in ages (he has recently migrated to Dublin to live in student digs) and he got a couple of nice compliments about his hair. Someone even told him that he looks like Russell Brand and he was chuffed at that.
The night started out poorly for Dave as he apparently got into an argument with Tom Murphy over matters architectural. For those of you who do not know , Dave is helping Tom design his house and Tom has been the bane of Dave’s life with constant changes of mind and requests for modified drawings etc. Tom got the hump with Dave on the night in question but Dave was riled up and ready for more. Leaving the scene f his first skirmish , he took on a much tougher challenge in the guise of an undesirable gurrier on the street. In fact , the said undesirable was accompanied by a few of his mates and even they were surprised by his how of braziness. They soon backed off when they saw the other member of our team emerge from the shadows , the incredible hulk of a man that is Peter Philpott.Like a police officer with presence and guile , Peter asked ‘was everything okay?’ and the scuts disappeared into the darkness of the night.
Sensible as he is , Peter called it a night at 11.30. With Tom, Dermot and Peter all gone ,the touring party was down to four in number. However , the best four were left to keep the flag flying and Caoimh played host to a superb after hours party!

Inspirational Wedding Suits Wedding Suits to inspire It is pouring rain in Cork today and it looks like Hurricane Desmond is going to keep shoppers out of the city. It is a pity because business has been ticking over nicely in the last few weeks as it leads up to the usual Christmas rush. Needless...

Getting The Look right with your Tailored Wedding Suit

Tailored Wedding Suits-Getting the Right Look The popularity of  blue wedding suits is showing the first signs of a slowdown in recent times. There are grooms that are now coming in to us and saying ‘ anything but blue.’ All good things must come to an end and the job of the retailer was...