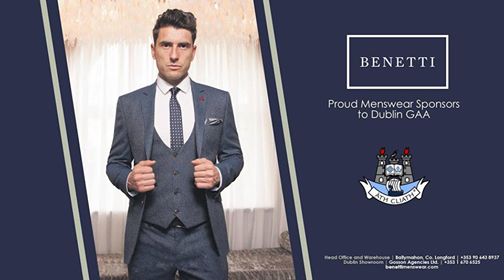 Dublin GAA Team wear Benetti Suits, as displayed in Croke Park on the 1st of October, the Dublin football team are champions on the pitch while during their post match celebrations at the Gibson Hotel they showed that they’re champions in style off the pitch too. As seen in the picture above each member of the victorious outfit sported a suave 3 piece Benetti suit. The blue check is subtle and cleverly exhibits the county colours in a tasteful fashion. 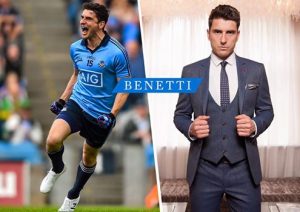 Rivals on the field but united in fashion as Benetti is also the official suit supplier to the Mayo team. Mayo came agonisingly close to lifting the ‘curse’ which has seen them reach 8 finals since 1989 and losing them all. It was level in the 40th when minute when Mayo goalkeeper, Robert Hennelly came out to collect a Dublin delivery that fell short. However, he lost control of the ball, spilling it to Paddy Andrews, who was dragged down as he prepared to shoot for goal.

It would later be cut to two points on four occasions, but Mayo just couldn’t draw level as Dublin’s rearguard held out under intense pressure. 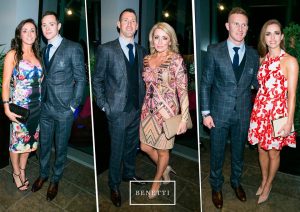 Like the Dublin team, Benetti as a brand has become a leader in its own field and its clear to see why, the suit shown is impeccably tailored for the All Ireland Champions. Cut in an elegant contemporary fit which compliments the physique of athletes in such exemplary condition.

Magee is so cool again!

Magee Suits  The appearance of Bryan McFadden and Keith Duffy on the late late last week raised a few eyebrows when they made known their plans to kick start the new Boyslife tour.It is essentially an amalgamation of the two bands,albeit there is only one member from each former band. The two lads looked...

Benetti the Suit of Sports Professionals

﻿All Types of Sports – All Kinds of Players – One Suit: Benetti In this social media crazed era, where a picture speaks a thousand words, how a sportsman presents himself off the pitch can almost be as important as how he presents himself on the pitch and these days the top GAA stars are...